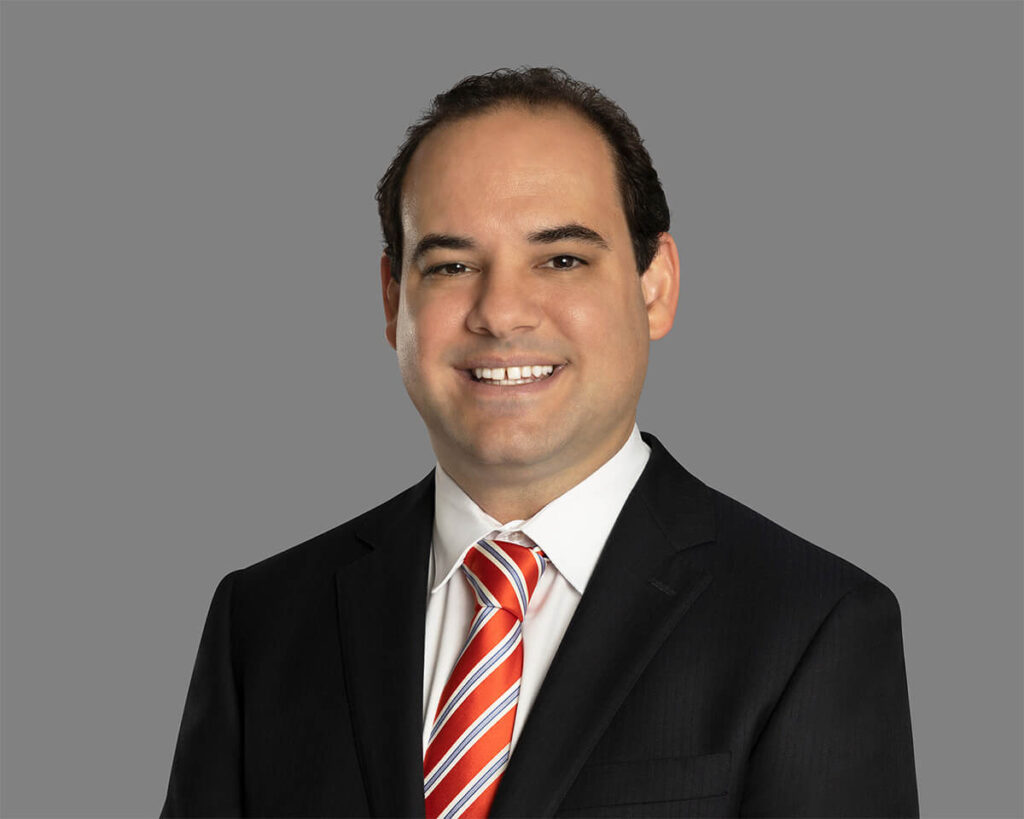 Alexander Fischer is a founding partner, and current Managing Partner, of Sanchez Fischer Levine, LLP, and heads the firm’s Broward Office. His practice is focused on business litigation and appeals, with a specific emphasis on contract disputes, business formation, employment and discrimination litigation, and arbitration. Alex’s clients include corporations, individuals, and community associations, and he routinely represents shareholders in disputes within a corporation. His practice also extends to the area of white-collar criminal defense, where he represents individuals accused of federal and state crimes at the trial and appellate levels. As a former prosecutor, Alex also has vast experience in the area of criminal law and is a seasoned trial attorney, with over 40 jury trials handled through verdict.
Alex is a professional, diligent, experienced and excellent attorney. He is both passionate and compassionate, a winning combination inside and outside the courtroom.
Martindale-Hubbel Peer Review
Fantastic attorney with high ethical standards and work ethic. I endorse this attorney.
Martindale-Hubbel Peer Review
Alex is a very intelligent, fair-minded and well-spoken attorney. A true testament to his character is how he is both highly regarded and respected among his peers.
Martindale-Hubbel Peer Review
Mr. Fischer exudes professionalism and courtesy. He is an excellent attorney with amazing trial skills, writing skills, and people skills. His work ethic is second to none.
Martindale-Hubbel Peer Review
I have worked with Alex both in criminal law and civil law and he has always been knowledgeable and diligent. He has extensive trial and courtroom experience and has a professional demeanor with judges and other attorneys.
Martindale-Hubbel Peer Review
I had the opportunity to work with Mr. Fischer in the past and he is the epitome of what a lawyer, both young and old, should strive to be.
Martindale-Hubbel Peer Review

The National Association of Minority and Women Owned Law Firms has admitted Sanchez Fischer Levine, LLP into its

SFL is excited to welcome Robert Kemper to its litigation team.  Robert joins SFL as an associate attorney

Alex has been able to utilize his litigation experience to achieve positive results for his clients in difficult and complex matters, such as obtaining a favorable judgment in a million-dollar proceeding supplementary seeking to, among other things, void two fraudulent transfers made by the judgment debtors to an offshore trust; his success on appeal of a finding of contempt in that same case; his full award in an arbitration against a trans-national moving company for damages; his representation of a major cruise line in numerous complex commercial litigation matters; as well as many others representations resulting in favorable resolutions.

Prior to founding Sanchez Fischer Levine, Alex worked for a well-respected South Florida law firm handling civil litigation matters for local police departments, private businesses, and individual litigants. Alex successfully represented clients in matters relating to civil forfeitures, FDUTPA violations, employment disputes, civil appeals, and general business litigation. He also litigated matters relating to the new Risk Protection Order (“RPO”) law, which allows for law enforcement to seize firearms and ammunition if they are deemed to be a threat to themselves or others. Alex began his career as a prosecutor in the Office of the State Attorney in and for Broward County, Florida. In just under six years, Alex secured thousands of criminal convictions and prosecuted an array of criminal charges, including violent crimes and major drug trafficking offenses.

Alex is an AV-rated Preeminent Attorney with Martindale-Hubbell and has received accolades from Super Lawyers, Best Lawyers, Florida Legal Elite, and the South Florida Legal Guide, among others. In the legal community, Alex currently serves as Vice Chair of the International Ethics Committee of the American Bar Association Section of International Law. Additionally, due to his reputation with other lawyers and judges, the Florida Bar appointed Alex to the Governmental and Public Policy Committee, one of a few substantive law committees of the Florida Bar. As to volunteer community efforts, he is an active member of the Young Lawyers Section of the Broward County Bar Association and International Jewish Federation.

Alex is licensed to practice in the States of Florida and Illinois, and is admitted into various federal courts around the country.